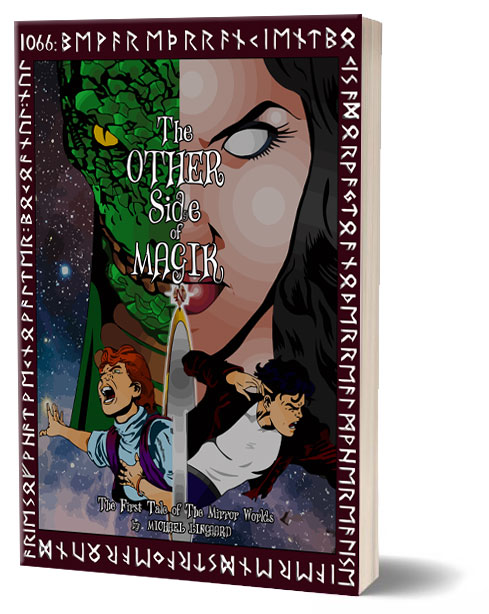 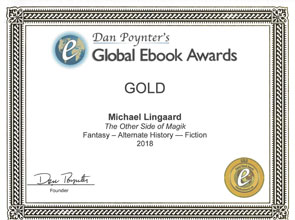 Imagine a world where history and nature took a slightly different path … Harold won the Battle of Hastings in 1066, the DNA spiral is left-handed, dragons are real, werewolves can get a pension, electricity doesn’t work … and magic does.

England is a twenty-first century world of steam buggies and airships, a world in which magic is the science that binds the fabric of society. This science could offer a great future for its students, including sixteen-year-old Garreth Aldredge.

In The Other Side of Magik, Garreth, along with Danny, his double in the parallel universe that is our universe, are sucked into each other’s world because a Mandrake needs a body to inhabit, a body that is impervious to magic.

Can Wizard Emeritus Salamander Ord save Danny from being inhabited by the soul of an evil Mandrake, and return Garreth and Danny to their rightful worlds?

There is an alternative reality to the universe we know and understand. A very close and similar reality that is almost exactly the same, almost normal and familiar … except for some minor deviations. History there took a slightly different path.

The Other Side of Magik is a mesmerising story that may just be true … if you allow yourself to believe.

“English born, New Zealand raised and Australia domiciled, Michael Lingaard uses well defined characterisation and clear plotting as the foundations of a cracking story. One sign of a better than average writer is when peripheral characters are utilised to the full, and in The Other Side of Magik there are no cardboard cut-outs, or red shirts. Whenever supporting characters appear, it’s for a reason. Their presence adds either to the plot or the development of major characters. Lingaard’s skill shows again in the way he pays attention to the little things; constructed magic, such as spells, does not work in England, but sympathetic earth magic is alive and well. One of the amusing aspects of this, we discover, via Garreth, now inhabiting Danny’s body, is how it can be employed on the used car sales lot where Danny’s father works, to pair up prospective buyers with cars they will like.”

Scroll down to read more reviews…

“The old man walked around the young man, sniffing. “I smell things, lad,” he told Danny. “Things that are wrong; things that don’t belong.” He peered into Danny’s eyes, examining him. The stare from the yellow eyes was unblinking and very disconcerting. Danny felt he was being pulled apart bit by bit.’

In recent years there has been a parade of writers following in J.K. Rowling’s enormously successful footsteps. Most of them don’t come close, and many of the books they’ve produced are a waste of good trees. Happily, The Other Side of Magik is not among the also rans. It’s an accomplished light fantasy, that from the outset is above most of its contemporaries. Author, Michael Lingaard, has done what so many writers fail to do; he understands his own creation. As a result, his story comes across as well conceived and highly credible. The action takes place mostly in Angland, on an alternate Earth on the other side of the mirror, where “magik” is a reality, and physics does not permit the development of electrical power. In Angland, DNA spirals to the left, and people travel in steam-buggies and airships. Geography and history are similar to the world we know, but differ at key points. The story centres on two teenage boys, Danny Royce, a disaffected wastrel from our reality, and Garreth Royal, a budding wizard who has just failed to make the grade. Both become unwitting victims of a devious, and ingenious magical body-snatch. An ageing, powerful wizard named Theolonia Crabbe has been forced to spend most of her life sharing her mind, and sometimes her body, with twin brother Horatio. He is a formless, evil entity, assumed to have been dead for decades. Unfortunately for his sister, Horatio was born a mandrake, and has used his powers to eke out a parasitical life within her mind. Theolonia, desperate to rid herself of his malign influence, has remade a legendary artefact; the Book of Null. This is a magical tome which, under the right circumstances, can be used to exchange minds and bodies with counterparts beyond the mirror. In Angland, a body which comes from the other side has the innate ability to cancel out constructed magic; the devastating power of the null. The dark plan set in motion is to exchange Garreth for Danny, and then let the mandrake forcibly steal his body.

English born, New Zealand raised and Australia domiciled, Michael Lingaard uses well defined characterisation and clear plotting as the foundations of a cracking story. One sign of a better than average writer is when peripheral characters are utilised to the full, and in The Other Side of Magik there are no cardboard cut-outs, or red shirts. Whenever supporting characters appear, it’s for a reason. Their presence adds either to the plot or the development of major characters. Lingaard’s skill shows again in the way he pays attention to the little things; constructed magic, such as spells, does not work in England, but sympathetic earth magic is alive and well. One of the amusing aspects of this, we discover, via Garreth, now inhabiting Danny’s body, is how it can be employed on the used car sales lot where Danny’s father works, to pair up prospective buyers with cars they will like. Meanwhile, back in Angland, Danny, inhabiting Garreth’s body, is finding his way in a wonderfully realised world without electrical power. Most enjoyable among the Angland cast are Mr. Toast, Garreth’s big fat and telepathic family cat, and Afferton Smythe, who begins the story as an elderly werewolf, blessed with the ability to literally sniff out magical corruption. As the lads get used to their strange new worlds, and the furtive, if innocent, delights of each other’s girlfriends, master wizard Salamander Ord seeks to unravel what has happened. What the good guys do not suspect, is that the mandrake is lurking, waiting for the opportunity to claim his prize. When he finally makes his move, the author does something that I’ve wanted a fantasy writer to do for many years. He applies realistic concerns to the gathering followers of evil. Instead of the usual fantasy cliché, where nasty cronies blindly follow a homicidal maniac, we find that the best of the bad bunch have learned from the past. Yes, they recognise the power and potential of a living, breathing mandrake, but they have no intention of giving him authority over their lives unless he agrees to certain conditions. Thus do we learn that the ultimate bane of the newly risen Dark Lord may be consensus politics.

Aside from wanting another hundred pages, not because the story needed it, but because I was enjoying it so much, the only negatives were the position of the six page alternate history prologue, which I felt would’ve been better as an appendix, and the early overshadowing of Danny and Garreth by more charismatic characters. However, I should make it clear that The Other Side of Magik is not intended to be the story of any one or two people. The mirror worlds are the real focus, and that leaves the way open for all manner of fascinating developments as the series progresses. At least two more books are planned, according to the author’s web site. Only time and fate will tell, but among the farts and hooligans of big league publishing, there are still a few canny heads blessed with the ability to spot a potential big winner. The Other Side of Magik is just the kind of book they should be looking for.”

“The genius behind this book is Definitely worth more than 5 stars! Since this book is set in England and Angland (The mirror world of it)
It takes a few chapters but once you are introduced to this whole knew world it is even more amazing than the Harry Potter world!-I know that is a strong statement but delve into this book and you will see how correct I am.
The characters are SO well written and expressed that you can’t help but see them and their personality in your minds eye as if they stood before you. And the same for the descriptions of the settings.
It is Such a brilliant book! what a GENIUS idea of writing and creating The Other Side of Magik!”

“I greatly enjoyed the deep historical roots to the story. The tale had a sense of ancientness to it. Lively descriptions added context to the setting; I “felt” the world that the characters were experiencing. I also liked how the author built context to the life of the boy in the “real” world. This led me to worry about what happened to him. Also, while this tale is a good-versus-evil saga, I liked the “possession” twist. The story wasn’t just about physical life and death; it was about the soul itself.
The only issue I had with the story was occasional point-of-view structure. Most of the time, the author did an excellent job identifying the focal character of an incident. However, point-of-view sometimes changed in the middle of an incident only to switch back again. As an example, the boy in the “real” world was the point-of-view character in an incident. Suddenly, in the middle of the incident, the reader is “hearing” the thoughts of the mother. Then, just as suddenly, the reader is looking through the eyes of the boy again. Another example is description that jarred me, as the reader, out of the story because the description didn’t make sense in the context. An example of this is a description of what the mother looked like while the point-of-view character is her son. This description was out of context to me as the reader because, normally, a son isn’t going to consider what his mother looked like unless he hadn’t seen her in a long time, or she was dressed in such a way that was out of character for her and the style shocked her son. Most of the time, though, the author did a very good job of alerting the reader to when point-of-view was changing. I look forward to more fantasy stories by this author.” 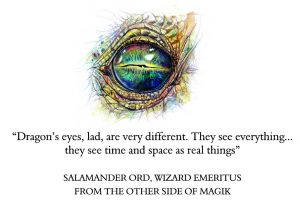