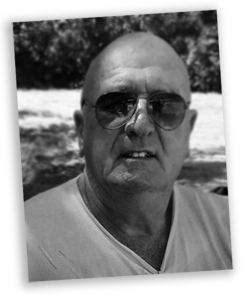 Any author worth his, or her, salt would use all their skills to create a profile that would be the envy of the literati. Such a profile could depict towering scenes of early deprivation and neglect that would assault the senses; life’s hard-won lessons could be held up as their shield against doubt and disdain; yet, through it all, beacons of hope would shine through the fog of mediocrity that surrounded them and point a finger towards a glittering future of linguistic excellence… and fame…

… ah well, I can’t claim any of that, for I was lucky. Life dragged me around the world from a very early age; new countries, new people; new dreams.

I was born in England, but I was taken, as a young kid, to Australia where my parents had their own dreams of a new life. Four years later we’re back in England, dream over. I then, as a pre-teen, had eight years coming to terms with the hard reality of life in a northern industrial town. Luckily, my parent’s dreams were not finished and at twelve years of age we moved to New Zealand.

Now here was a place where I felt I belonged, and college then engineering fed within me that which I draw on today; inquisitiveness, logic, appreciation of the written word and the ability to just day-dream. Day-dreaming was something that would come very much to the fore years later.

I moved to Australia after ten years in New Zealand to chase career and fortune; along the way I got married, had two children, bought a house and started a business. But at the back of my mind were the day-dreams; always the day-dreams. So I decided to convert day-dreaming into making stuff up and putting it down in books.

My first book was 270,000 words and was to be the first of a million-word trilogy. Pax Magellanica was a sci-fi saga, packed with great technology and strong characters. Couldn’t interest any agents to look at it. So it sleeps until my other works make the grade.

Next came my latest release, the first book of a fantasy trilogy, The Other Side of Magik. Again, no real interest in it so I self-published it. Guess where you get to with no professional help? Nowhere, that’s where. So it too slept. An explainable contradiction, given it’s my latest release.

I then wrote the first book SBPRA published, Jonathon Goode: Honorary Witch. Again, first of a trilogy. With that up and running I decided to reprise The Other Side of Magik and that has just been released. So, two up, one to go ands sequels to all to write. I’ll be busy.

All because of day-dreams.